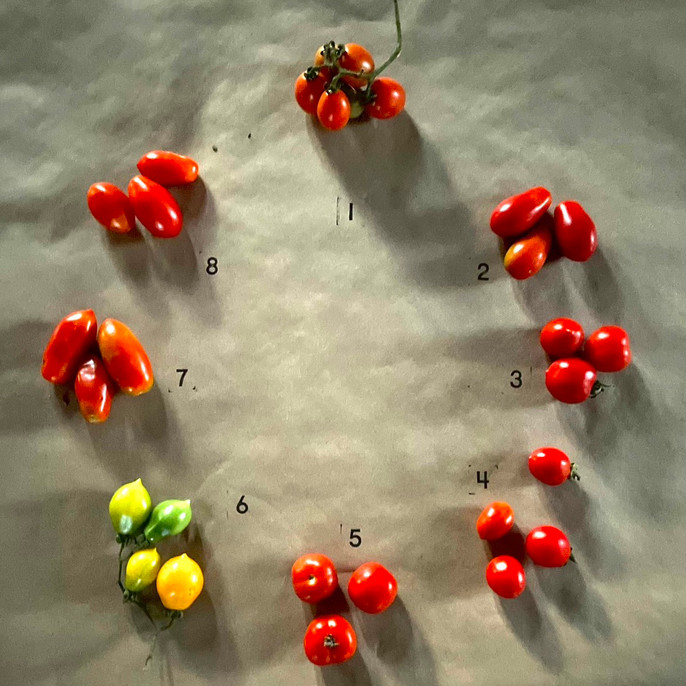 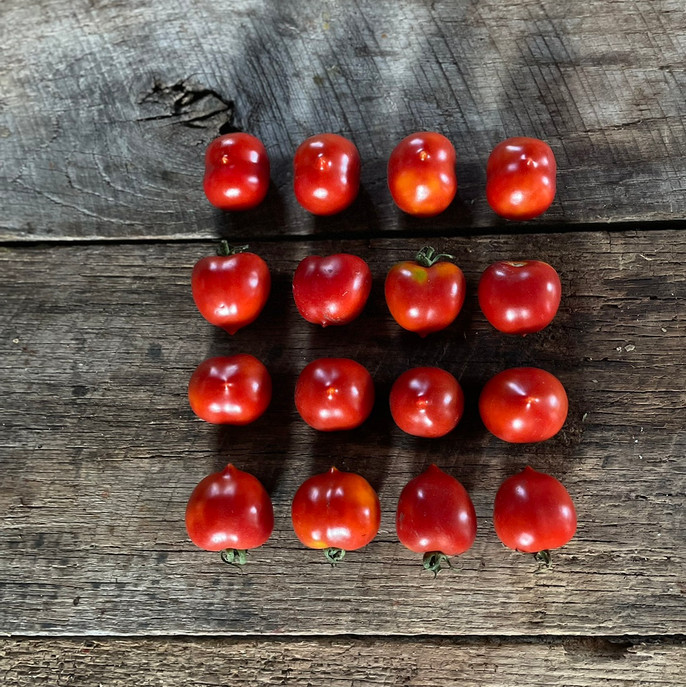 This is an Italian collection of small tomatoes that are used for paste and are stored, dried, or used fresh.

about 5 seeds of each

A grappoli We have been growing this one for a few years, eating it fresh it had always been a bit flat, but we eat it with salt and balsamic vinaigrette or grilled and the flavor would really come thru, not that uncommon with paste tomatoes. But then one season a friend showed me a video he shot in Italy of the hanging of tomatoes, what a game changer. From the slopes of Mt. Vesuvius (Pomodorino del Piennolo del Vesuvio) all the way over to Galatina (Pomodoro Galatia)These Piennolo tomatoes are grown and stored for winter. Piennolo is in fact a Neapolitan dialect word that means “hanging”. After that, we tried it and let them hang till December. Good lord what a transformation, the water content drops sweetness builds and the pulp becomes a blast of concentrated tomato flavor that will knock the socks off of the winter doldrums.

Carbarino This lovely tomato hails from Campania in southern Italy, Its capital is Naples so you don’t need to know much more about this gem of a tomato. Loved for its ability to make a sauce that is divine. But we have become fond of eating this tomato fresh as well, as well as putting it into heavy rotation in all of our culinary pursuits. Brilliant sliced-on pizza and focaccia as well as roasted and grilled to perfection, the already stunning flavor is intensified, add olive oil and salt and your mind will be blown. I have not seen these used as traditional storing tomatoes, but here on our farm, they keep really well in our unheated packing shed. We eat them well into January, but they're so popular that they are usually gone by before that.

Tondo con pizzo  We love this tomato so much that we put a bunch in a box and shipped them to Anthony Mangieri of Una Pizza Napoletana round because we wanted to thank him for his inspiration and congratulate him on being voted the best pizza shop in the world. Tondo con pizzo translates to round with pointed beard, and that is what you get, fruits are borne on small trusses of up to five tomatoes. They are the size of a walnut, blemish-free, and indubitably productive. Our seed comes from Evan Gregoire of Heirloom Seedhouse in Portland, he collected it in 2018 from a family in Southern Italy. Again this is another tomato that ends up growing in our greenhouse at our home and will produce well up till the solstice. The fruits also hold amazingly well in our unheated packing shed. (oddly they also last really long in the back seat of my truck and have become my go-to tomato to gift to people I run into.)

Principe Borghese is one of the classic hanging tomatoes or a drying tomato “pomodori secchi” A classic tomato from Southern Italy, some say it dates to the turn of the century and others say it is older, either way, it’s totally worth checking out. One of the best tomatoes for drying, we use a dehydrator since we are so humid here in the Mid-Atlantic. We store them dried and in olive oil, the olive takes on the beautiful rich flavor of the tomatoes. Fruit hangs on trusses clustered in groups of 8 - 10 and is very productive. The plants are determinate and don’t grow much larger than five feet tall.

Canne Torre Regina is from the Southern Italian region of Puglia, it is named for a small town with a famous lighthouse and Regina, The Queen's name comes from the calix (those little leaves around the stem.) and how it looks like a crown. This is a true storage tomato and its trusses are hung from a string and used all winter long. We have had them last well into the new year. The Italians have a saying, “A wrinkly hand makes a great broth.” and these wrinkly tomatoes in winter make an amazing broth. The fruit besides having a crown is a round golf ball-sized tomato that is flattened on both the blossom end and stem end. The flavor is rich and herbaceous which intensifies with the hanging process.

Piennolo del Vesuvio Gallo is one the hands-down best tomatoes I have ever grown. A yellow sport of the famed Piennolo del Vesuvio which dates to 1885. From the area of Somma-Vesuvio in the province of Naples. It is the best-known of the hanging storage tomatoes. With the yellow one growing in our hearts every year. Ours look like they would make it well into the end of January, but seldom do these beauties make it past all the pizza and focaccia we eat in December. As they age these yellow ones take on an almost gummy bear appearance, with such an intense flavor everyone who eats one of these needs to know more about them. If you do one thing this coming growing season, grow this tomato.

Ten fingers of Naples is a medium-sized paste tomato that hangs in big clusters, sometimes ten, or more. They are long and thin and with them hanging in big trusses they do kind of look like fingers. This paste tomato from Naples is one that I love to grow. Great production of fruit on plants that are disease free. The plants also are semi-determinate, which means they don’t grow out of hand. This is a tomato that I love to roast, with a bit of oil and salt, and then make a sauce that is out of this world.

Tondino di Marduria also called fiascetto di Manduria The rod of Marduria or the flask of Marduria, take your pick it is a winner either way. From the Puglia region in Southeast Italy which is the front of the heal of the boot. Originating from the town of Maduria in the Province of Taranto, minutes from the Ionian Sea. This semi-determinate plant produces plenty of 2-3 oz plum tomatoes that are good at storing but are better know for drying. I dry these for winter use and it is the tomato that people who eat my food always comment on. I preserve them in olive oil and on a bleak Febuary afternoon these tomatoes coming out of the oven on a focaccia with make you forget it is not tomato season. A mini San Marzano that is second to none. Also my boy Erich Stekovics says that this tomato,” The bush parade bears fruits that fill large buckets and hide like eggs under the plant.”  or ”Eine Mini-San Marzano paradeiser, die ihresgleichen sucht. Die Buschparadeis trägt Früchte, die große Kübeln füllen und sich wie Eier unter der Pflanze verstecken. Yeah in Austria the tomato is called de paradeiser.

Be the first to leave a review